UP TO 12 CREWS (NO KIDS CREWS) AT THE COMPETITION – The 4 best crews are qualified for the battles. During the battles, the Bboys dance in turn, the figures acting as questions / answers. The 4 teams compete in battles for the semifinals (place 1 against place 4 and place 2 against place 3 of the standings). The winners of these semifinals face eachother in the final to determine the winner.

MORE THAN 12 CREWS (NO KIDS CREWS) AT THE COMPETITION – The 6 best crews are qualified for the battles. During the battles, the Bboys dance in turn, the figures acting as questions / answers. The 2 best teams are directly qualified for the semi finals, the other 4 compete in battles for the quarter finals (place 6 against place 3 and place 5 against place 4 of the standings).The winners of these quarterfinals face the two crews directly qualified in the semifinals. The final opposes the two winning crews of the semifinals.

LENGTH OF A SHOWCASE – The maximum length of the show is 6:00 minutes which will be very strictly adhered to! Attention: There are time penalties for non-compliance.

WINNER OF THE "BEST SHOW" AWARD – Crew ranking number 1 after the showround automatically wins the price for the best showcase.

ONLY REAL CREWS – are allowed to participate in the competition. Real crews means dancing, practising and performing together beside the BOTY.

INDIVIDUAL DANCERS – of a crew are only allowed to join one national or international elimination.

BOTY TEAM MEMBERS – Involved members of the local BOTY organisations are not allowed to participate in the competition as a dancer.

JUDGES BOARD – The jury should consist of 3 to 5 members, selected very carefully in close agreement with the BOTY Headoffice (Germany). At least one member of the jury should be one of our BOTY judging team.

There are different criteria which will be voted on by the judges. For each criterion each judge has to give points from 1 to 10. As more points the judges are giving to a crew as better the crew will stand in the ranking list. As usual the best four crews in the rankings will go for the final battles. During the battle there will be supplementary specific battle criteria to vote for the judges:

Synchronicity („The state or fact of being synchronous or simultaneous“, how synchronised is the crew performing the show if there are synchronised parts in it?)
Stage Presence („The state or fact of being present; current existence or occurrence“, Is the crew performing in a way that doesn’t let you look at something else? Does the crew impress thru what they’re performing?)
Theme & Music („A subject of artistic representation. The art of arranging sounds in time so as to produce a continuous, unified, and evocative composition, as through melody, harmony, rhythm, and timbre“, like description of dictionary?)
Choreography („Something, such as a series of planned situations, likened to dance arrangements“ / Does the whole show make sense? Is there a concept which guides thru?)

What are the judges looking at to decide how to vote?

Vocabulary („A supply of expressive means; a repertoire of communication“ / How many different movements is the crew/dancer able to do?)
Innovation („The act of introducing something new“ / What makes the crew something special, different to the others?)
Foundation („The act of founding, especially the establishment of an institution with provisions for future maintenance. The basis on which a thing stands is founded or supported“ / How many of the basic movements, that have been evolved in the beginning of this dance, is the crew/dancer able to do?)
Concept („A general idea derived or inferred from specific instances or occurrences. Something formed in the mind; a thought or notion“ / Do the things which the crew/dancer is doing work together, does it makes sense. Is there a clear idea or a message in what the crew/dancer is showing?)

Sign up in advance via and8.dance and help to create a smooth rundown.

Get your ticket now and check out our Early-Bird offers. Book now and save 30%!

Our team welcomes you at the Urban Dance Festival 2018 in Zürich (CH) and is looking forward to hearing from you soon. Please do not hesitate to contact us for any further questions. We are gladly willing to help you.

With the support of 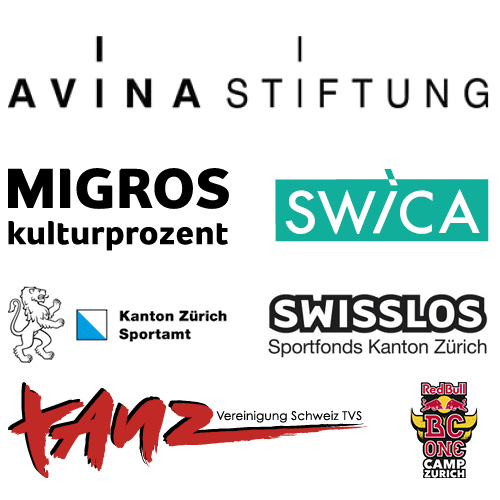